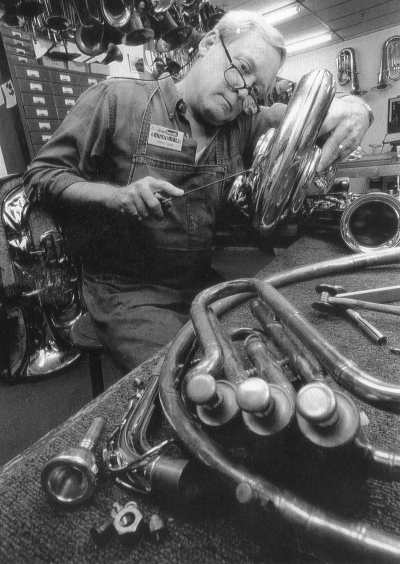 “Corky” whose real and true name was Alton Dale Cain was born in Hillsboro, Texas in May, 1930 and raised by his maternal grandparents in the small town of Frederick, Oklahoma about 28 miles from Vernon, Texas, the birth place of Jack Teagarden.

Everyone called him “Corky.”

He played some football, basketball and baseball at Frederick High and learned how to fly a plane before graduating. He always liked working with his hands fixing things and building things. Then the Korean War happened. In September, 1950 he enlisted in the United States Air Force. At his first duty station in Lake Geneva, Wisconsin he met a nice girl named Donna from Elkhorn.

He was transferred to CFB Goose Bay at Happy Valley-Goose Bay, Canada to serve his 18 months of out-of-country duty. About 3 months into that assignment he was sent to Thule, Greenland near the land of mid-night sun and eternal night, to fix radar equipment, helping to make his country safe for democracy. He also learned the artistry of photography, how to frame pictures, take portraits, develop film, capture and create beauty.

To shorten his stay out-of-country, Corky volunteered to spend an additional 6 months in Thule so that he could return to the US in 12 months instead of 18. He was transferred to Oklahoma City in the spring of 1953.

Corky and Donna got married in Elkhorn on October 13, 1953 and Donna joined him in Oklahoma City.

Staff Sergeant Cain received his honorable discharge on September 10, 1954 and he and Donna returned to Wisconsin to have and raise their family. Donna’s dad was the head of sales for the Holton Band Instrument Company.

Being self-employed meant long, long hours (80-90/week) and with more kids (ending up with eight) it just became too much so after about 3 years in business, he took a job with Allied Repair in Elkhorn (which is now Allied Supply). In 1965, Corky took the job as the head of brass repair at Ward Brodt Music, a large regional music store located in Madison that sold about everything, from sheet music and guitar picks, to PA systems, band instruments and grand pianos. 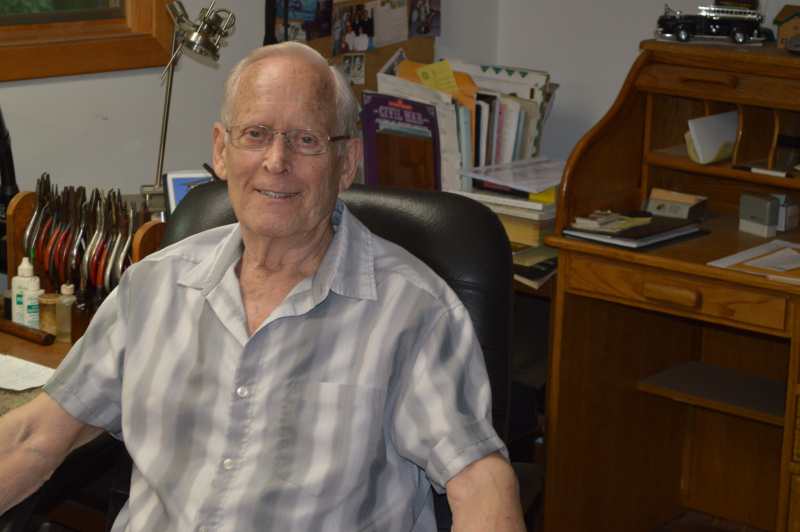 I first met Corky in 1974. I still had my 10H Coprion slide trombone (with a valve section complete with WTUT) that I bought in high school. By 1977, it was time for an overhaul and when he finished that horn it looked beautiful again and played better than ever. Perfect.

Then he took my King Flugelbone, had the lacquer stripped and gold plated the bell and trim, silver plated the body and installed a spring loaded trigger on the 3rd valve slide. That horn played way better when he was done. Then he gold-plated my Minick valve trombone, then my Yamaha YEP-641 Euphonium, then my Conn 72H bass trombone…..you get the picture.

You see, Corky is a perfectionist (so say his kids). His advice was always spot-on and the final results, well, perfect….exactly what I wanted.

His marriage to Donna floundered in the late ‘70’seventies and ended sometime in the ‘80’s but his kids all loved him….and their mom, equally….a tribute to their parents.

Corky retired from Ward Brodt in 1996 and set up a small shop over his garage at the house where he lived with Janine, his very special lady and created all those beautiful restorations you see on this website.

About 10 years ago, I bought a couple of really distressed Conn valve trombones off eBay (like rescuing puppies & kittens). I wanted triggers on the first and third valve slides, special counterweights on the bells and just generally see what we could make out of them. The results were magical….they both looked great and played great. (You can see them on the Conn Loyalist website). I couldn’t stop.

He’s put a double-axial flow Thayer valve unit on a Holton TR-180 and Reynolds 72-X bass trombones, single Thayer units on two Conn 88Hs big bore tenors and a Conn 71H bass trombone, rebuilt and hand bent nickel crooks and replaced tubes and figured out how to install trigger assemblies on eight different makes and models of valve trombones, including at least 20 Conns and did a remarkable job restoring a Conn “Naked Lady” baritone. He knows this amazing engraver, “Sherry” in Elkhart, Indiana, he knows the guy that stripped the lacquer from my Flugelbone, his son, Bob, made the “Triple C” counterweights and Brian who did such great lacquer work for us. Corky even designed his own dent-removal machine.

I’ve learned so much from him. Here are just a few:

Over-buffing a bell can ruin a good horn….always look at the engraving. What anhydrous lanolin is, how often a small lacquer disturbance can be fixed with a little jeweler’s rouge, how plating works and how gold won’t adhere to brass but silver will, so a light “silver strike” is laid down first before the gold is plated, that nickel is impervious to the effects of human saliva, nickel-plated bells can be soldered in place after the plating because the flux will wipe right off but silver or gold plating is soft and has to wait until after the bell has been soldered in place and that the plating folks will have to mask off the areas that aren’t being plated and that because nickel is brittle compared to gold or silver the only way to truly restore a nickel plated bell is to strip the nickel, do the dent work, then buff and color and then re-plate with nickel….and on and on and on and…. 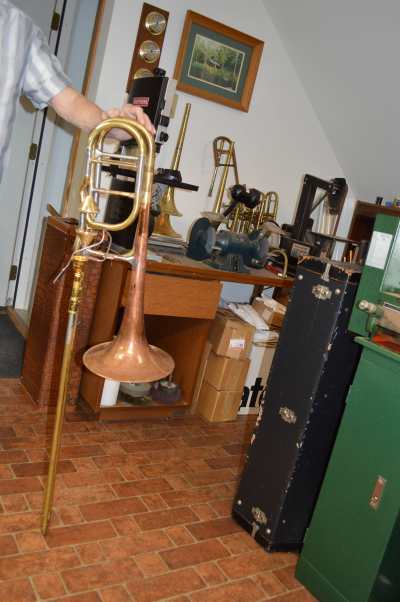 Corky was not a musician. He loved music and musicians but his most important lesson is this:

“Musicians should play, repairmen should repair”…end of lesson.

He just hated it when a musician came to his shop with a horn butchered by a pair of pliers. Please don’t take your pliers to your horn. Repair folks have mouthpiece pullers that can safely remove a mouthpiece in about 5 seconds and not hurt your horn. Corky would be pleased if you just be patient and take your horn to your local repair person.

Over the years he worked on horns for many of the greats that came through town and needed some work done on their horns, including Louis Armstrong.

Corky was a genius, an artist that worked in brass and lacquer.

He was also a diver, scout master, outdoorsman, nature lover and a car and plane aficionado. He loved his cabin on the river in northern Wisconsin. His time at the cabin with his family and friends was sacred to him.

On October 13th, he had the lower lobe of his right lung removed along with a malignant tumor. He was returned to the hospital from inpatient physical therapy with pneumonia and a very nasty infection outside his lung called “nocardia.” He lived on IVs and antibiotics for days and days, suffered having another large drain tube put in his chest.

He finally made the decision to refuse any further treatment and asked to be returned to the home he shared with Janine for over 20 years so that he could say good-bye to his children, grandchildren (and even some great-grandchildren) and his beloved Janine.

After a wonderful evening and morning at home, the chest tube was removed by his physician and he drifted off to his final rest about 2 hours later.

Corky Cain, this special, unassuming, meticulous, quiet and gentle man, my dear friend and colleague of 40 years, died shortly after 2:00 o’clock in the afternoon of Tuesday, November 18, 2014.

Asked to speak at the funeral, the preparation of remarks was not going well when the thought occurred to just bring a couple of horns (a Triple C valve trombone and the Reynolds bass trombone) for show-and-tell. Afterwards, one of Corky’s grandkids was heard to say, “So that’s what Grandpa Corky did.” That was reward enough.

Anyway, for any of you that wondered, Corky was a real person and my friend and I loved him and there isn’t a day that goes by that I don’t think of him and miss him.

I think we all hope that when our time comes we can be as courageous and resolute as Corky. Let it be said of Corky Cain that he lived well and he died well on his terms. 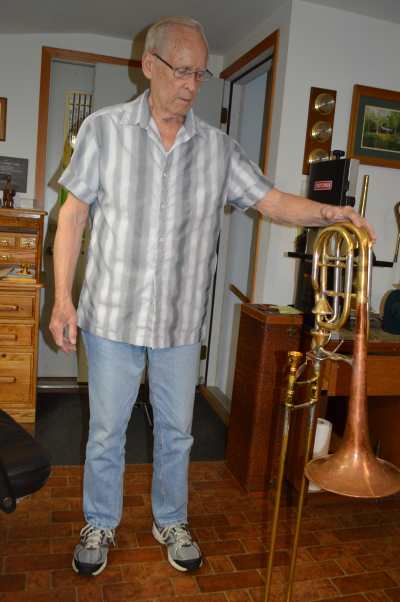